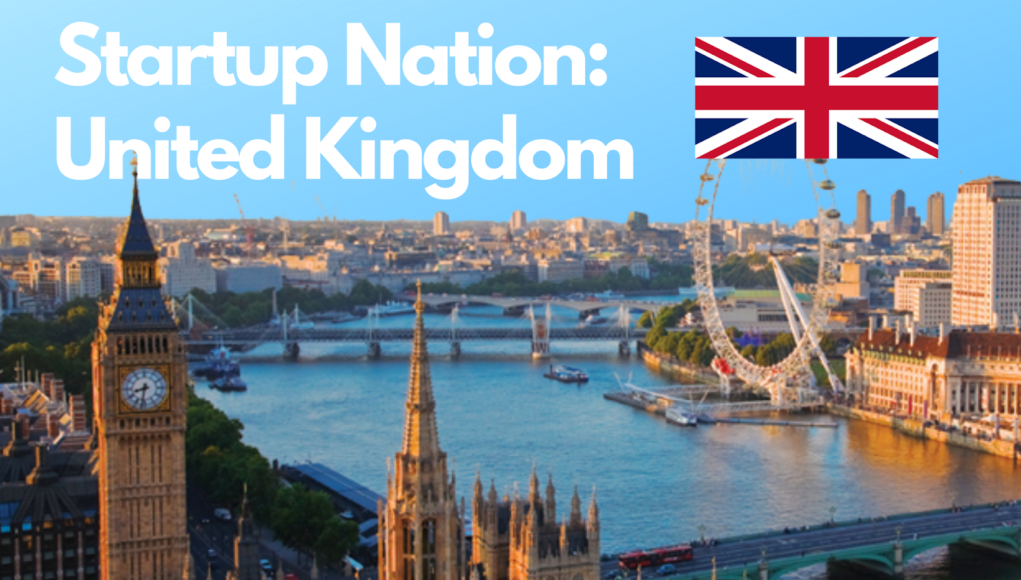 Great Britain has a great history. When we think about the United Kingdom, a few things that instantly come to our mind are the monarchy, the Queen and the beautiful architecture. But did you know that the capital of Britain – London ranks 2nd for the best startup hub in the overall startup ecosystem (as per Startup Genome rankings)? So how did London transform from the capital of the British Empire, where the sun never sets, into the capital that never sleeps?

In this article of the Startup Nation Series, we talk about the startup ecosystem of the capital of the UK – London.

London ranks among the top cities in the world to grow a globally leading company. The startups benefit from global connectedness to other ecosystems and a flow of knowledge into the city, which helps them build global market reach. The UK also has a favourable time zone, a strong talent pool and research opportunities. London is also among the top five ecosystems with a startup visa program that launched in 2019.

While looking at the benefits, it is also not correct to ignore the drawbacks. Yes, everything isn’t rosy. However, there are many challenges that might prevent startups from growing their companies in the city. Some of them are:

Despite being among the top places in the world for startups to create innovative technological solutions, “stability, security and privacy” remains as London’s “genome”, which in some way affects the products and services born in it.

The following facts and figures are for the year 2020:

1. Total early-stage funding raised by startups in London amounts to US$ 6 billion, the global average being US$ 431 million.

2. The startup ecosystem in London is estimated at an astronomical US$ 92 billion, the global average being US$ 10.5 billion.

You must be aware that London competes with New York for the title of “the world’s financial capital”. London is the second-largest financial centre globally and has many successful fintech startups employing more than a million people. In 2019 alone, the capital produced two Fintech unicorns. In 2018, the Financial Conduct Authority of UK launched a global Fintech regulatory sandbox. Although Fintech has been London’s strength, Edtech, HRtech and AI are also catching up with time. Some of the top Fintech startups in the region are –

Revolut is a financial services startup specializing in mobile banking, card payments, money remittance, and foreign exchange. It offers a range of digital banking services and targets tech-savvy mobile app users. It also has the feature of transferring money abroad in 29 different currencies with a prepaid debit card that enables cash machine withdrawals in 120 countries.

Monzo operates a digital-only bank offering unique solutions and features to fulfil its clients’ needs. It is a perfect app for people who want to get things done in a click and don’t see the need for branches and cheque books. Its investors include Passion Capital, Thrive Capital, Goodwater Capital, Accel and General Catalyst.

More than one-third of around 12,000 UK investors are located in London. The amount of investment available for funding startups has been growing year after year. According to the Startup Genome report, the median seed round funding amounts to US$ 650K (global average being US$ 494K). The median Series A round funding amounts to US$ 4M (global average being US$ 2.7M).

The UK govt. has also launched a Seed Enterprise Investment Scheme that provides investors up to £150,000 of their investment back in income tax relief. There has also been an increasing interest from the US and Asia investors in the UK’s startup ecosystem, as can be seen below.

Venture capital investment in UK tech topped £6.3 billion in 2018 (as per Tech Nation 2019 report). In 2019, it increased to £10.1 billion. Raising VC funding can be a bit difficult for early-stage startups in London, but if you have a decent technological edge, a tangible problem and some traction in terms of revenue, there might be an opportunity to secure funding. Some of the top VC firms in the UK are:

1. Seedcamp: Launched in 2007, Seedcamp invests in startups that address large and global markets. The fund focuses on early-stage companies and invests between £100k and £2M. It usually backs software-as-a-service (SaaS) companies.

2. Notion Capital: Launched in 2009, Notion Capital focuses on B2B and SaaS and cloud business solutions. Some of its successful exits include Star and MessageLabs. The fund typically invests in early-stage and Series A startups.

3. Passion Capital: Founded in 2011, the fund helps startups at the early stages. It focuses on SaaS and cloud solutions, digital media, e-commerce and analytics solutions. Its investments range from £200,000 to £14 million.

London is home to around half of the UK accelerators, which amounts to nearly a hundred places that support budding entrepreneurs. Some of the famous hubs and accelerators in London are:

1. Campus London: It supports a global network of leading technology hubs and accelerators created by Google in 125 countries for entrepreneurs and startups. They connect their community to the best Google resources. They have several immersion programs for women and Afro-American founders as well.

2. RocketSpace: It is a coworking accelerator interested in high-tech and fast-growing businesses. The acceleration program aims to raise investment for startups within three months. In addition, selected startups can access the leading corporations in their field through various networking opportunities.

3. Breed Reply: It focuses on startups and companies at their early stage of development. It mainly invests in IoT startups, helping them get started and drive fast and profitable growth through an actively operated investment model.

London is an excellent destination for aspiring entrepreneurs, where every second business is proliferating. As a result, startups have recently become a considerable investment sector in the city. The startups also enjoy various tax deductions that can significantly reduce the fiscal burden.

While there are many pros to choosing the UK as your startup destination, one has to look at the cons as well. Factors like sky-high office rents, massive demand for talent resulting in higher salaries, and high cost of living affect a startup’s decision to operate in the region.

However, London is indeed developing very dynamically. Startups will have to carefully balance the pros and cons and then decide whether they want to reap the benefits of the UK’s global startup ecosystem.