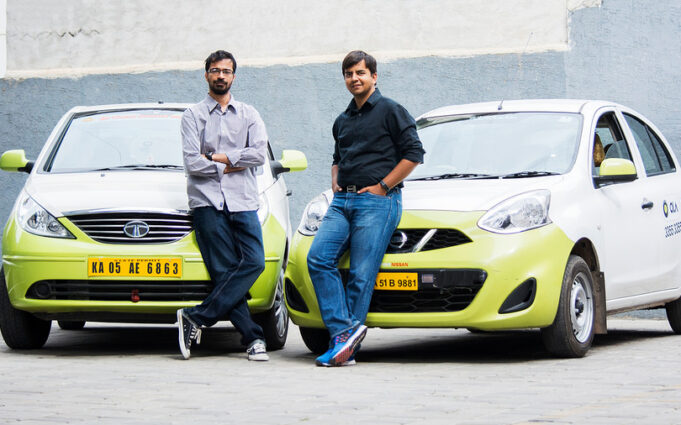 The Indian unicorn mobility service provider, Ola, needs no introduction. Being the very first Indian cab aggregator company, Ola has made availing of cab services a smooth experience. Owned by ANI Technologies Pvt. Ltd. and formerly known as OlaCabs, Ola was launched by two IIT Bombay graduates in December 2010. The company bridges the gap between commuters and cab owners.

Instead of purchasing and renting out its cars, Ola partners with several taxi drivers and owners and adds a touch of modern technology to the whole setup. This enables customers to book cabs at a short notice through Ola’s app. Ola is India’s homegrown ride-hailing app with almost 60% market share (as of 2014) in India. It has users across 100 cities of India and employs 15 lakh driver-partners.

Ola was officially launched on 3 December 2010 and as with most innovative startups has an interesting story behind its launch. Born in Ludhiana, founder of Ola, Bhavish Aggarwal, was just like every other success-driven entrepreneur. Bhavish first started an online site named Olatrip.com that offered weekend trips and holiday packages.

In trying to keep his tour and holiday planning business afloat, Bhavish had to travel from Bangalore to Bandipur for which he rented out a car. The cab experience was horrible. The driver stopped the car in the middle of the journey and demanded a renegotiation of the previously agreed-upon fare. After being refused, the driver proceeded to abandon Bhavish on the way to his destination.

This is when he realized how his plight was probably similar to a lot of customers across the country who were looking for quality cab service. Bhavish saw the potential of an extraordinary cab booking service, and he changed Olatrip.com’s business model to the one we know today as Ola Cabs.

Bhavish then onboarded his co-founder Ankit Bhati to take Ola Cabs forward. Although Bhavish’s parents didn’t agree with his startup ideas, in the beginning, his parents became supportive once OLA obtained its first round of angel investment from Snapdeal founder Kunal Bahl, Rehan yar Khan and Anupam Mittal.

Bhavish believes that anyone can have a good business idea but to implement it successfully, one must have a scalable model to power the business. According to him, the best or one of the safest models one can or should adopt is running a business while owning “zero” inventory.

Mobility unicorn Ola has seen some pretty good days in the short eleven years since it was established. Let’s see the highlights of their startup experience.

In every startup’s journey, a few bumps in the road are expected, and Ola Cabs is not exempted from this phenomenon as the founders have gone through some pretty tough times.

Bhavish Aggarwal and Ankit Bhati had to face many challenges at the inception of Ola Cabs. They worked very long hours, and sometimes Ankit, the co-founder of Ola, had to code for 48 hours at a time. They have also had to drive customers to their desired locations at times because the drivers failed to show up, but this did not dampen their spirits. The duo worked tirelessly, and people began to enjoy their services.

The twist in their story happened when angel investors Kunal Bahl and Rohit Bansal invested Rs 2 crores in their startup. This gave them a primary push, and there was no looking back for Ola from there.

Ankit Bhati and Bhavish Aggarwal founded Ola on December 1, 2010. It has its headquarters and additional offices in Koramangala, Bengaluru, Karnataka, India.