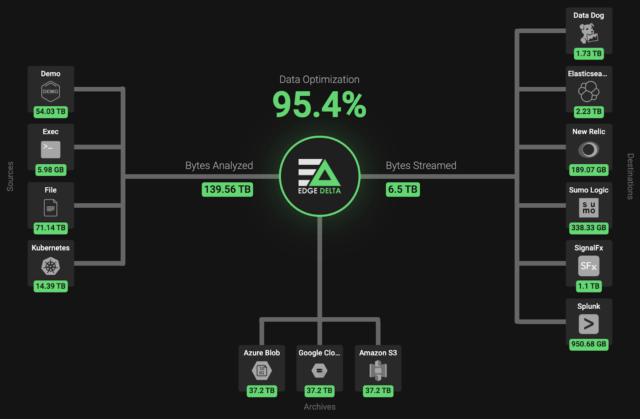 Edge Delta, a Seattle based startup that is a platform for predicting, detecting and observability anomalies in security and operations, announced that it raised USD 15 Million in a Series A funding round on 26th June 2021.

The funding round was led by Menlo Ventures and former CTO of Splunk, Tim Tully, with the participation of existing investors Amity Ventures and MaC Ventures Capital. After this investment, the company has raised in total USD 18 Million in funding.

The team of the startup plans to utilize this capital raised to increase the workforce and support all the new customers, who have shown interest in the startup’s products. To manage that it is developing its go-to-market and teams for marketing, as well as a customer support team.

“What I saw before I was leaving Splunk was that people were sort of being choosy about where they put workloads for a variety of reasons, including cost control,” said Menlo Ventures’ Tim Tully, who joined the firm only a couple of months ago. “So this idea that you can move some of the computing down to the edge and lower latency and do machine learning at the edge in a distributed way was incredibly fascinating to me.”

Edge Delta was founded by Fatih Yildiz and Ozan Unlu in 2018, having its headquarters in Seattle, Washington, United States. The startup is a platform that lets enterprises use an analytical approach to remediate and identify potential DevOps, Operational, IT and Security more accurately.

“Our thesis is that there’s no way that enterprises today can continue to analyze all their data in real-time,” said Edge Delta co-founder and CEO Ozan Unlu, who has worked in the observability space for about 15 years already (including at Microsoft and Sumo Logic). “The way that it was traditionally done with these primitive, centralized models — there’s just too much data. It worked 10 years ago, but gigabytes turned into terabytes and now terabytes are turning into petabytes. That whole model is breaking down.”

“There’s kind of this concept of unbundling of Splunk,” Unlu said. “You have Snowflake and the data warehouse solutions coming in from one side, and they’re saying, ‘hey, if you don’t care about real-time, go use us.’ And then we’re the other half of the equation, which is: actually there’s a lot of real-time operational use cases and this model is actually better for those massive stream processing datasets that you required to analyze in real-time.” – he added.