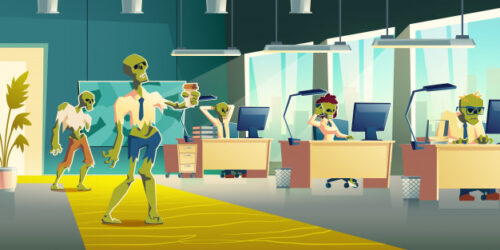 Yes, you have read it right, there are zombies in the corporate world. And what’s more, it seems like their numbers have been on a rise since the 1980s. But how can there be zombies in the corporate world? Before we start imagining stuff, let us get one thing cleared. The term ‘zombie’ here is being used in a metaphorical sense. Further, it is not being used to refer to humans, instead, it’s being used to refer to certain corporate organisations.

What makes an organisation a zombie?

According to popular definitions, a zombie is a dead corpse that is brought back to life and it particularly feeds on the living. The essence of this definition is extrapolated to identify certain organisations that should have been long dead (liquidated), but are only kept alive by favourable policies, lower interest rates, weak banks and more.

Coming to the main question on how to identify zombie companies, economists have defined them as organisations whose PBIT (Profit before interest and taxes) is not sufficient enough to cover their debt servicing costs, over an extended period of time. In more simple terms they are organisations that do not make enough profits to pay off the interest on their debts.

But this crude definition rings more questions than it answers. For instance what if the organisation is a startup? Surely, one cannot expect startups to get profitable immediately. Or what if the organisation is not profitable in the present but has high growth potential in the coming future? To answer such questions we can look at 3 important criteria and two definitions: one proposed by Adalet McGowan et al and the other by Banerjee and Hofmann in their BIS report 2018.

Coming to the criteria, for a company to be classified as a zombie it must satisfy the following 3 conditions:

1) Lack of profitability over an extended period of time

2) The company should not be a young one

3) It should have low future expected profits.

For more clarity, we can even look at the definitions proposed by Adalet McGowan et al, and Banerjee & Hofmann:

In a broader sense, Adalet McGowan et al defines zombie companies as organisations whose ICR (Interest coverage ratio) has been less than one for at least 3 years and the companies are at least 10 years old.

What causes their rise?

Now that we know what zombie companies are, we can look at what causes their rise and see if they follow cyclical patterns in sync with the business cycles or if they follow a growing trend.

There are multiple things that cause their rise:

On one hand there would now be more money in the hands of individuals, boosting domestic demand, and on the other organisations can increase their capital expenditure or increase their operations, boosting employment.

But this measure is generally taken by taking into consideration the broader view of the economy, as it can have its own downsides. For instance there could be a risk of inflation without any real growth or there is always an increased danger of companies defaulting on their debt repayments if loans are given recklessly. Further, coming to zombie companies lower interest rates means they can avail evergreen loans to meet their existing debts. This can literally translate into keeping unproductive firms alive on life support.

Secondly, the rise in zombie companies, to some extent, can be attributed to weaker banks and lower pressure on organisations to cut down their debts. Weaker banks lend to non-viable firms and do not clear their balance sheets. This lowers pressure on non-performing firms to reduce their debt, undergo restructuring and in the worst case begin insolvency proceedings.

Thirdly, government policies do play a role in keeping zombie firms alive. For instance, in times of distress governments grant tax cuts or increase the moratorium period to ease the burden on organisations. While in the short run, it certainly helps companies get back on their feet, it can also assist zombies in staying alive for longer periods.

Keeping zombies alive can have its own consequences. While in the short run there aren’t going to be any job losses and it can be expected that they get profitable again, in the long run they do affect the economy at large.

In the first place keeping them alive means locking resources (financial, human and material resources) for unproductive purposes. Consider this: there is a piece of land which can be given to person A or person B. Person A is unproductive and can only produce 50 units of a fruit in 6 months. Moreover there is no demand for that fruit in the market. On the other hand person B can produce 100 units of mangoes, which are highly in demand, in 4 months. Person A here is a zombie and giving him the land and supporting him financially means poor utilisation of scarce resources, lower productivity and producing things that are not required/ not in demand. The same thing can be extended to a much larger scale to understand how zombies lock resources.

Secondly zombies eat out the profits of other firms. Through competition they force other firms to bring down their prices, and increase the labour and funding costs. While on one side competition is a good thing as it brings down the prices and offers better prospects for employees, how prudent is it if one is competing with a zombie on life support. For all we know other firms may get bitten by zombies and turn into zombies themselves.

Last but not the least, zombies can bring down the GDP and GDP growth rate of a country. GDP is the total value of all goods and services produced in a country in a year. Put the resources in the hands of zombies and they will squander it all.

Final note in view of the pandemic

The pandemic has certainly put more zombies onto the grid. There are even unicorns that have turned into zombies. And governments all around the world are trying their best to put the system on hold until the pandemic wanes off. The worst-hit are the zombies that have been in existence even before the pandemic wreaked havoc. On a positive note, maybe it’s time that such zombies (the existing ones) left for the good. Maybe the pandemic is their doomsday and we can finally have a renewed economy much stronger than the existing one.

2) For the purpose of their report Banerjee and Hofmann took Tobin’s q value as follows:

B Corps and the Uncertain Future of Shareholder Capitalism

State of Women Entrepreneurship over the years in the United States