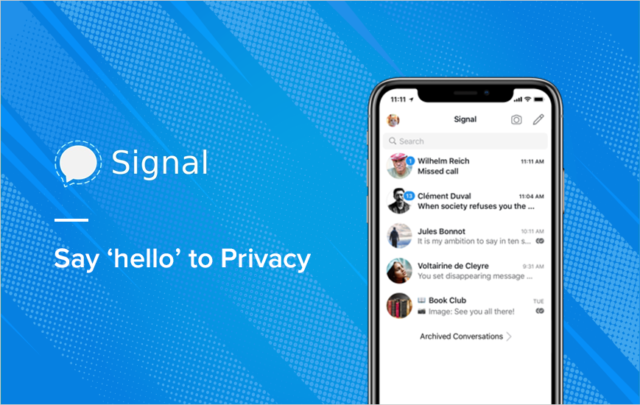 I bet that one out of ten people reading this article must have ditched WhatsApp for the more privacy-friendly messaging app – Signal. And if not ditched it, many have downloaded Signal out of curiosity about the fuss around the App.

The controversy surrounding WhatsApp’s new terms of use has agitated people worldwide. It states that more information will be shared with its parent company Facebook. Apparently, Facebook intends to use your chat data for advertising. It also inadvertently exposed group chats to the public via Google search until the issue was sorted. WhatsApp had asked its users to accept its new privacy policies by 8 February to continue using the app which was extended  to 15 May, after receiving backlash from users. People started moving towards Signal, an alternative where the parent company’s business interests do not clash with privacy.

The fuss and buzz about Signal started with a simple two-word tweet by the richest man in the world and the eccentric boss of Tesla, Elon Musk – “Use Signal” on 7 January 2021. This made Signal top the list of the most downloaded applications. But Signal wasn’t created yesterday. The end-to-end encrypted messaging app was launched back in 2014.

Here is everything you need to know about Signal:

Signal is an end-to-end encrypted messaging app developed by the Signal Foundation and Signal Messenger. It is like any messaging app and lets you send messages and make voice and video calls via the Internet. The main thing that sets Signal apart, or can be considered as its USP is the focus on privacy. It is open-source and its code is peer-reviewed. Independent experts regularly check the privacy and security of the app. Signal is co-founded by Moxie Marlinspike, an American cryptographer and Brian Acton, who also co-founded WhatsApp.

If you go to the homepage of Signal, you will see it promoting itself as an app with – “An unexpected focus on privacy, combined with all of the features you expect.” Signal also provides additional security features such as a second password (other than the OTP) to log in to Signal on new devices, biometric authentication, etc.

Signal promotes itself as an application that is both secure and respectful of privacy. It is recommended by many notable people such as Edward Snowden – whistleblower and privacy advocate, Jack Dorsey – CEO of Twitter and Square, Laura Poitras – Oscar-winning filmmaker and journalist, among others. The messaging system of Signal guarantees end-to-end encryption of calls, texts, attachments. It never intercepts the conversations, thus making absolute confidentiality its trademark.

While Signal has become a hit only recently, how can we forget Telegram? Telegram claims to have 500 million active users per month and is very much in the game. It also gained more than 25 million users in the past week. But Telegram does not offer end-to-end encryption by default. Even though there is a ‘secret chat’ option with end-to-end encryption, it does not extend to groups.

Every app has its strengths and weaknesses and it is hard to get a full package in one app. While Signal’s biggest strength is its privacy, its chat backup and restore mechanism lag behind. It does not support cloud backup of chats, and restoring messages from its local backup isn’t easy either. But even though it is a lot easier to back up chats in Whatsapp, the backed-up chats are not end-to-end encrypted. Since the chats are stored in the cloud, Google can see it.

If we talk about app features and the number of people using it, WhatsApp is ahead. But despite this, so many people have shifted to Signal overnight. This signals one thing and that is people’s changing priorities. With the daily news of WhatsApp chats leaking, people are becoming more and more cautious of their choices. The messaging apps have to understand that consumers value their privacy as much as convenience. What we are seeing now is that the business model that is selling privacy is competing to knock down the one selling convenience. And the final choice is in the hands of the consumers.

The heated debate of Signal vs Telegram vs WhatsApp will continue for a few days and finally settle down by the number of people in your social circle using these apps. If most of them ditch WhatsApp and move to Signal or Telegram, it will become clear which messaging app wins.