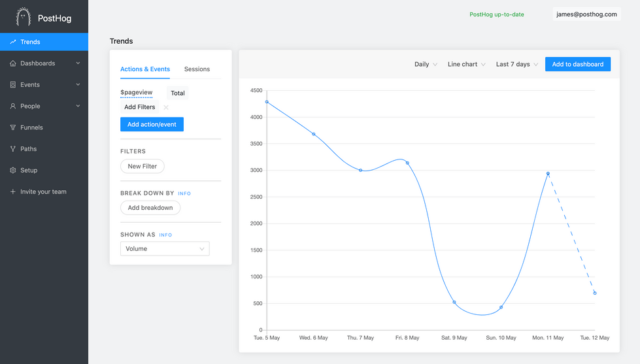 The funding round was led by GV (formerly Google Ventures), with participation from Y Combinator’s Continuity Fund. Jason Warner (CTO, GitHub) will join PostHog’s board along with Solomon Hykes (Founder, Docker) and David Cramer (Founder, Sentry). PostHog had raised US$ 3M in seed round in March 2020.

The funds raised in the round will be utilized by PostHog to further build its product and engineering teams, accelerate the delivery of new platform features, expand the breadth of use cases and to launch a scalable enterprise version.

Founded in 2020 by James Hawkins and Tim Glaser, PostHog provides open-source product analytics. It helps engineers understand their product usage, automate events, and user data collection. It also tracks and auto-captures which features for product events are being triggered. PostHog is headquartered in San Francisco, California.

PostHog was originally founded during Y Combinator’s Winter 2020 batch, where co-founders James Hawkins (CEO) and Tim Glaser (CTO) had been working on a different product at the time. They would often get frustrated at having to send user data to third parties to understand which features of their software were being used.

“We’ve been designed to be all-remote and open source from scratch. Anyone in the world can view all our policies or even suggest changes to them. Having public discussions and policies written down avoids the need for most meetings, so we can work across multiple time zones, and lets us easily onboard our team much more rapidly than a traditional organization,” said James Hawkins, co-founder and CEO of PostHog

On learning how enterprises self-build a data pipeline, data lake and analytics stack, they realized that they could build something much easier to use for large teams of developers or product managers. They wanted to build a platform that would help anyone answer simple product questions without writing any code or sending any data to a third party.

“Our goal is to increase the number of successful products in the world. That starts with empowering engineers to improve a business’ metrics and consolidating the disparate set of tools out there today to understand user behaviour. We also now offer PostHog Enterprise, which is a more scalable version of our platform, designed to support tens of thousands to tens of millions of users,” said Hawkins.

What Investors have to say

Tyson Clark, General Partner at GV said, “PostHog’s approach to open source product analytics for developers addresses a large market opportunity in product analytics. PostHog has seen strong early traction from the developer community, and we continue to be impressed with the execution and vision of the co-founding team.”

Komal Pattanayak - January 8, 2021
Breaking News
These are some US-based Medtech startups that raised funding today- MANA Therapeutics Raises US$ 35M in Series A Founded in 2018, MANA Therapeutics is a clinical-stage...

US-based startup TaxBit secures US$ 100 to grow its crypto tax...